Photosensitisation is an abnormal reaction of the skin to sunlight due to the presence of a photodynamic agent in the dermis. It is primarily a condition of sheep, cattle and horses but other species may also be susceptible.

The condition can be divided into two categories; primary and secondary. Primary photosensitisation occurs due to the ingestion of lush green plants containing photodynamic agents, such as St John's Wort or clover. Secondary (hepatogenous) photosensitisation is the most commmon type of photosensitivity seen in animals and occurs due to liver or bile duct damage, most often as a result of ingestion of hepatotoxic plants such as Senecio jacobea (ragwort), Lantana camara (Lantana), Lupinus angustifolius (Lupins) and Blue-green algae. The normal conjugation and excretion of phylloerythrin (a breakdown product of chlorophyll) is prevented leading to its accumulation in the blood and body tissues. In the skin this leads to the absorption and release of UV light, resulting in a phototoxic reaction. 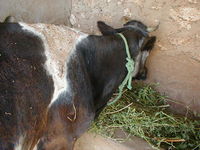 Photosensitisation in a Friesian cow (Image sourced from Wikimedia Commons))

The condition is characterised by clearly demarcated 'sunburn-like' lesions that are confined to unpigmented or hairless areas of the skin. The nose, lips, ears, muzzle and udder are commonly affected areas. In the acute stages, the affected area(s) becomes erythematous and oedematous with exudation and crust formation. Animals may be pruritic or painful. Other clinical signs may include swollen lips or muzzle, tachypnoea, tachycardia, diarrhoea and salivation.

If the photosensitisation is secondary (hepatogenous), icterus may be present. Other signs may include those consistent with hepatic encephalopathy such as head-pressing, circling, and behavioural changes.

The history and clinical signs of affected animals are important in order to differentiate whether the condition is primary or secondary. In the case of primary photosensitisation there is often a history of exposure to plants containing photodynamic agents. Alternatively, there may be a history of administration of drugs such as phenothiazines, sulphonamides or tetracyclines or exposure to mycotoxins such as blue-green algae. Signs of liver disease are usually absent.

In animals affected by secondary photosensitisation the classic skin lesions of the condition are often generalised rather than localised, and are accompanied by the signs of liver disease listed above. Serum biochemistry often reveals increased liver enzymes (ALP, GGT, SDH and ALT) but bilirubin and bile acid concentrations are usually normal. Ultrasonography may provide additional diagnostic information.

Definitive diagnosis may be obtained by liver biopsy. In the case of pyrollizidine alkaloid toxicity, histological evaluation may reveal megalocytosis, biliary hyperplasia and fibrosis.

Anti-inflammatory drugs such as flunixin meglumine and topical steroid creams may be useful to decrease the severity of cutaneous lesions in the acute stage of the disease. Secondary bacterial infections of cutaneous lesions are common and should be treated with antimicrobials and correct wound management. Lesions generally heal well, and surgical debridement is reserved for only the most severely necrotic lesions.

If the animal is affected by secondary photosensitisation, supportive treatment should be provided. A low-protein, high-energy diet rich in branched-chain amino acids such as beet pulp is recommended. Intravenous fluid therapy with 5% dextrose may be necessary in hypoglycaemic patients with signs of hepatic encephalopathy.

Animals should not be grazed on pasture known to contain photodynamic agents and contaminated hay and grain should also be avoided. In the case of farm livestock, less valuable or older animals may be used to 'pre-graze' affected pastures before other animals are introduced.