Mastication is the process whereby food is broken down by mechanical digestion in the cavidad oral. The mejillas and lengua function to position food over the dientes, where grinding can occur. Mastication requires correct muscle movements and jaw articulation.

Rumination allows food to undergo mastication more than once. This is also called 'chewing the cud', it allows greater nutrients to be extracted and absorbed from the food particles. 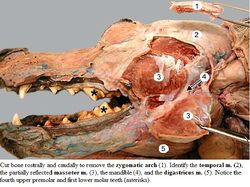 The muscles of mastication are well developed.

The Digastricus muscle is the 'jaw opening' muscle. Its origin is the paracondylar process of the occipital bone. It inserts at the angle of the mandible. The muscle has two bellies; The caudal half from the second visceral arch innervated by the facial nerve (CN VII) and the cranial half from the first visceral arch, innervated by the mandibular branch of the trigeminal nerve (CN V3).

All jaw closing muscles are derived from the first visceral arch and are innervated by the mandibular branch of the trigeminal nerve (CN V3).

The masseter muscle originates from the maxilliary region of the skull and the zygomatic arch. It inserts on the wide area on the caudal side of the mandible. It has several divisions and causes unilateral and bilateral contraction. It also protrudes the jaw.

The lateral pterygoid muscle originates from the pterygopalatine region of the skull. It inserts on the lateral aspect of the mandible. It also protrudes the jaw (one-sided contraction).

The medial pterygoid muscle originates from the pterygopalatine region of the skull. It inserts on the medial aspect of the mandible. It causes one-sided contraction to close the jaw.

Lateral Translation of the Mandible

The masseter muscle and the contralateral medial and lateral pterygoids are involved in the lateral translation of the mandible. 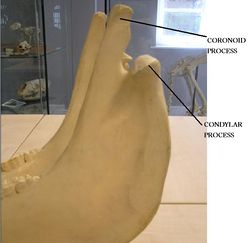 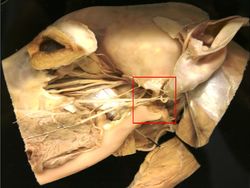 Herbivores have large masseter and pterygoid muscles for extensive chewing. Herbiverous species have a limited digastricus muscle. In the horse, the muscle insertion site for the masseter is large to snap jaw shut.

Carnivores have a large temporalis muscle for snapping the jaw shut, e.g. in lions and pitbull terriers. Canids have a larger digasticus muscle than herbivores (but smaller in comparison with jaw closing muscles). In the dog, large forces are needed to shut the jaws, so the point of articulation of the temporomandibular joint is level with the teeth.

2.Pot 258 Lateral section through the head of a dog