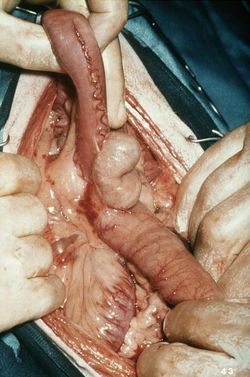 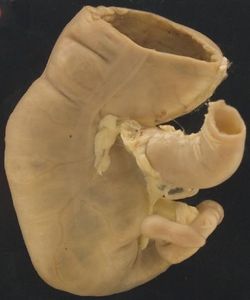 The caecum is a blind ending diverticulum of the large intestine and it exists at the junction of the ileum and the ascending colon. Its size and physiological importance varies between species. It is a site of microbial fermentation, absorption and transportation.

The caecum communicates with the ileum via the ileal orifice and with the colon via the caecocolic orifice. It consists of a base, body and apex. The apex is the blind-ending portion. It is attached to the ileum by a fold of peritoneum called the ileocaecal fold.

1. Microbial Fermentation The contribution of this is species dependant. The products of fermentation are volatile fatty acids (VFAs).

2. Absorption VFAs that are produced are absorbed here.

3. Transportation Segmental contractions facilitate absorption and microbial activity. Every 3-5 minutes, segmentation is replaced by mass movements. This is similar to peristalsis, but large portions of the caecum contract simultaneously to move chyme into the colon.

In canine species, the caecum is on the right side of the abdomen. It is unique because it has no direct connection to the ileum. It is short and held in a spiral shape against the ileum by the ileocaecal fold. Little microbial fermentation takes place.

In the ruminant, the caecum is found on the right side of the abdomen, in the supraomental recess. The apex points caudally. It is relatively small and featureless, there are no taenia or haustra. Some microbial fermentation takes place.

A significant amount of fermentation takes place in the equine caecum.

The caecum is on the left side of the abdomen, with the apex pointing caudoventrally. It is cylindrical in shape and there are three taenia present. The ventral taenia provides the attachment for the ileocaecal fold. The lateral and medial taenia are free.

The caecum has no villi. The mucosa has mucous glands, the lamina muscularis has large lymphatic nodules and the submucosa has no glands.

1.Pot 48 The Small and Large intestine of the Ruminant

2.Pot 52 Lateral view of the Abdomen of a young Ruminant

3.Lateral View of the Equine Abdomen

7.Small and Large intestine of the Sheep