The colon is a site of microbial fermentation, the relative importance of this is dependiente de la especie. The colon can be divided into the following portions; Ascending, transverse and descending. 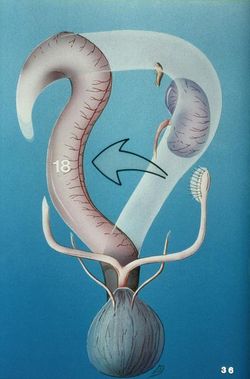 The following anatomical arrangement is found only in cats and dogs, see diferencias entre las especies. The ascending colon continues from the iluem at the ileocolic junction. It runs to the right of the cranial mesenteric artery in a caudal to cranial direction. At the cranial border of the mesentery it turns medially to become the transverse colon. The transverse colon runs from the right side of the abdomen to the left side of the abdomen. Cranial to the transverse colon is the stomach, and caudal to it is the intestino delgado and cranial mesenteric artery. The descending colon continues on from the transverse colon running caudally on the left. It then passes more medially as it enters the pelvic cavity. Upon entering the pelvic cavity it is continued as the recto.

The colon is a site of microbial fermentation and absorption of the products of microbial fermentation, volatile fatty acids(VFAs). Transportation is also important here. Motility in most species is brought about by segmentation and peristalsis. Antiperistalsis also occurs and is particularly important in horses, ruminants and rodents. Chyme is transported towards the small intestine so as to fill the ciego. In the horse, the antiperistaltic movements delay the movement of chyme from the ventral to the dorsal colon, which increases the time chyme is available for fermentation in the ventral colon. Mass movements move the content of the large intestine into the recto.

For information on the equine colon, see: equine alimentary system. 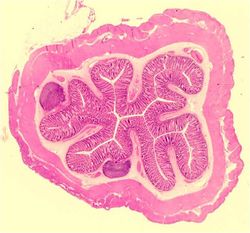 1.Pot 48 The Small and Large intestine of the Ruminant

5.Small and Large intestine of the Sheep