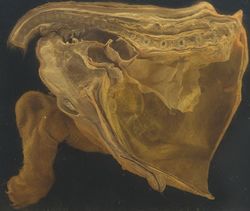 The rectum lies between the terminal portion of the descending colon and ano. It is empty most of the time, except after the mass movements of the intestino grueso which move faeces into the rectum. This stimulates defeaction, which may happen when an animal is frightened.

The rectum exists dorsal to the reproductive organs, bladder and urethra. The cranial portion of the rectum is attached to the dorsal body wall by a short mesorectum which is a continuation of the mesocolon. The mesorectum is reflected to continue with the parietal peritoneum of the pelvic cavity and to cover the urogenital organs ventrally. This forms the rectogenital pouch, therefore the most distal part of the rectum is retroperitoneal. This distal, retroperitoneal part is directly attached to the vagina in the female and to the urethra in the male. The retroperitoneal space is filled with soft tissue rich in fat. 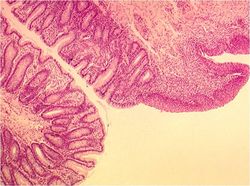 The epithelium of the rectum is columnar. Goblet cells are present in the mucosa.