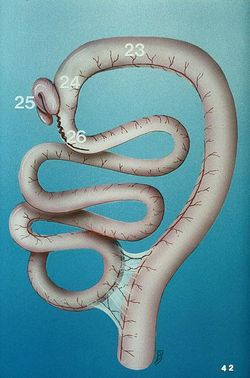 Illustration of the jejunum, caecum, transverse and ascending colon - © RVC 2008

The large intestine extends from the ileum of the intestino delgado to the ano. Water, electrolytes and nutrients are absorbed which concentrates the ingesta into faeces. Faeces are stored prior to defeacation. There is no secretion of enzymes and any digestion that takes place is carried out by microbes. All species have a large microbial population living in the large intestine, which is of particular importance to the hindgut fermenters. For this reason, hindgut fermenters have a more complex large intestine with highly specialised regions for fermentation.

The large intestine can be divided into: The ciego, colon, recto and ano.

Water Absorption: Chyme entering the large intestine is semi solid. By the time chyme leaves the large intestine as faeces it is solid because most of the remaining water has been absorbed. Water absorption is achieved by the generation of an osmotic gradient between the gut lumen and the enterocytes. Sodium is actively transported into the enterocyte and is followed passively by chloride ions to increase the osmotic potential of the enterocyte.

Transportation: Chyme is transported slowly in the large intestine. Chyme from the small intestine passes into the caecum and the colon in similar amounts.

Storage and Defecation: Remaining water, waste and undigested food is stored as faeces prior to defecation. Defecation is the periodical expulsion of faeces into the environment.

Commensal flora competitively inhibit attachment of pathogens to enterocytes in addition to competing for nutrition and substrates. Many also produce inhibitory growth substances that are toxic to other bacteria (McGavin and Zachary, 2007).

Continuous peristalsis discourages persistence of toxins and aids in their elimination from the gut.

Similarly to the intestino delgado, there are pacemaker cells that generate an action potential. Cells are able to function as a syncytium due to gap junctions, allowing the action potential to spread. Contractions are generated in the forward (peristaltic) and backward (antiperistaltic) directions. Antiperistaltic contractions move ingesta into the caecum in some species. The formation of action potentials is under a much stronger neural influence than in the stomach and intestino delgado. The large intestine receives sympathetic and parasympathetic innervation. The sympathetic have coeliac, cranial mesenteric and caudal mesenteric ganglia. As the sympathetic fibres leave the ganglia, they surround their respective artery. Parasympathetic innervation increases the frequency of action potentials and thus stimulates peristalsis. Sympathetic innervation has the opposite effect. Neurones interact with the myenteric plexus to affect contractility, and with the submucosal plexus to affect secretions. Motility of the large intestine increases during meals, possibly as a result of gastrin and cholecystokinin secretion. 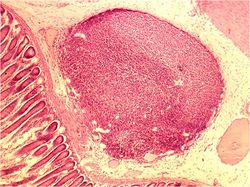 The caecal - drains the ciego.

The Colic - drains the ascending and transverse colon. 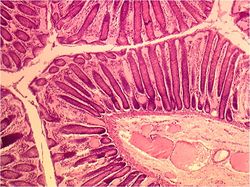 The mucosa of the large intestine is smooth; there are no villi or microvilli. The mucosal glands are much longer and straighter. The number of goblet cells in the mucosa is increased compared to the intestino delgado, as mucus is very important for lubrication of the ingesta as it passes through the intestine, particularly as more water is absorbed from the lumen making chyme drier.

Digestion is nearing completion by the time chyme enters the large intestine.

Most digestion occurs in the large intestine. Taenia are present.

Test yourself with the Large Intestine Flashcards

Pot 48 The Small and Large intestine of the Ruminant

Pot 52 Lateral view of the Abdomen of a young Ruminant

Small and Large intestine of the Sheep